Successful Wedding & Event Harpist Leah Fox combines exciting music with exquisite personal service. A highly recommended Harpist for Weddings from both hotels, agencies and past clients, she takes pride in performing her harp music in a beautifully presented manner on her Italian crafted Ariana harp. With a degree in musical performance and having studied the science of the harp, your event will be in safe hands. 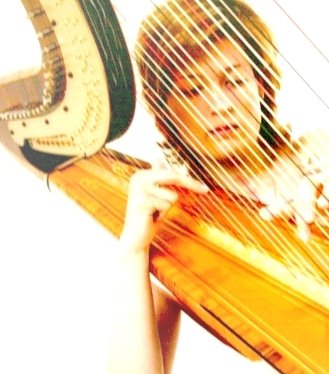 Leah plays a concert harp with the extended soundboard – the ‘Ariana’ by Salvi. The harp is inspired by the fine art of marquetry famed throughout Italy featuring handcrafted veneer inlay created from magnificent timbers of palisander and maple.  It is an exceptionally beautiful harp and will look exquisite in any location adding that special touch to your special occasion. Coupled with subtle amplification that boosts the resonance of the harp, its sound will fill any room creating a warm atmosphere for both small intermit gathering as well as large venues that can cater for over two thousand guests. Leah's aim at your event will be to provide delight and entertainment for your guest’s whist ensuring they can continue their conversations without feeling that they need to raise their voices to be heard.

Leah began the harp at the age of six, passing her Grade 8 Pedal Harp with Distinction at 18.  She then completed a music degree at Leeds University studying performance, aural perception and the science of the harp. Other parts of her degree included composition and music technology allowing her to play and understand the full capabilities of the harp and the music that can be played and written for it.

She plays a concert harp with an extended soundboard, the Ariana by Salvi. The harp is inspired by the fine art of marquetry famous in Italy and features handcrafted veneer and maple. It is an exceptionally beautiful harp.

Leah’s repertoire is very varied, ranging through Classical to Celtic and including show tunes, film themes and jazz. She also plays her own compositions and arrangements. Her experience of playing at functions began at eleven and she has played at civil ceremonies, drinks receptions, wedding breakfasts, society functions and special occasion dinners at the most prestigious hotels and restaurants of Yorkshire.

Her orchestral playing has taken her to Italy, Wales, Germany and several cathedrals and concert halls within Britain. She was selected as the English player for the prestigious New Sounds Concert at the Edinburgh International Harp Festival for the Millennium Festival and played for the BBC 'Songs of Praise'. For five years she was Principal Harpist for Leeds Youth Orchestra and played for Leeds Youth Opera and Leeds University Orchestra as well as being invited to play for orchestras of Yorkshire and Lancashire, including The Leeds Symphony Orchestra.

Leah was under the tutorage of Eira Lynn Jones, the Professor of Music at the Royal Northern Academy in Manchester. She continues to learn new arrangements and harping techniques. She has also studied with many famous harpers such as Savourna Stevenson, Wendy Stewart, Isobel Mieras and Anne McDearmid, as well as with some great American harpists such as Park Stickney, Deborah Henson Conant, Carol McLaughlin and Kim Robertson. She has also been a pupil of Frank Sternfield and Ieuan Jones.

As well as her solo work, Leah is also a member of the popular ceilidh band Dogsbody in which she plays her Celtic harp-accompanied by her amplifier!